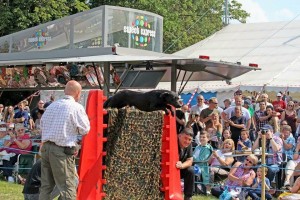 The Kipperridge Gundogs showcase the best abilities of gun dogs, as well as being entertaining and a real crowd pleasing experience.
Adrian & Caroline perform with their team of highly trained Labradors and Spaniels. The display involves how to train from the onset a gun dog to the finished article.

The initial demonstration starts with how to teach a puppy or youngster the foundation stages of obedience and retrieve. The audience are amused and captivated by the puppies which are shown in their raw stages of training… this is a fun part of the display were anything can happen!

Adrian then goes onto demonstrate intermittently with a number of dogs at different levels of their training, teaching the audience how to train important exercises such as steadiness to game and stopping on the whistle. Adrian commentates himself throughout the demonstration…. his commentary is not only highly informative but in parts, extremely amusing.

One of the highlights of the show is a short display were Caroline handles her trained Labrador to jump in excess of 6ft over a high jump and 14ft across a long jump!

Adrian has been training dogs for 35 years & he is a very respected Professional Gun Dog Trainer. In 2010, Adrian was also privileged to have been the recipient of “The Gun Dog Trainer Of The Year Award”, which was presented to him by The Countryman’s Weekly Newspaper.

Adrian has competed and won many field trials over the years as well as competing in working tests. Adrian has represented and qualified 9 consecutive years to run with different dogs representing England at the prestigious CLA Game Fairs and in 2009 Adrian was awarded the highest score ever achieved by a Springer Spaniel gaining a fantastic 98 points with his ESS “Rosie”.