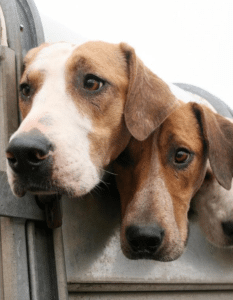 The Cheshire Forest Hunt was established at the start of the 1947-48 season by Phillip Hunter who kennelled a pack of forty couple (80Hounds) at his family home at Littleton Old Hall, near Chester. He took the North of Cheshire and also acquired the whole of the Wirral Peninsula to hunt three days a week. Some of the country around Ince, Barrow and Delamere, along with the country north of the River Dane was on loan from The Cheshire Hunt. The Wirral had previously been hunted by the Wirral Harriers but they disbanded at the outbreak of World War Two.

The boundary between the Cheshire Forest and the Cheshire Hunt was fixed as the Chester to Northwich Road through Tarvin, Kelsall, Sandiway and Hartford to Northwich, and then followed the River Weaver up to the Mersey Estuary. The Forest country extends beyond Knutsford to Congleton and Macclesfield.

Since 1983 the hounds have been kennelled here at Peover Hall near Knutsford, and the Hunt now goes out two days a week throughout a season from September to March.

Following the construction and opening of the M53 motorway, and its links to Chester, the whole of the Wirral and a swathe of country around Picton, Stoak and Upton, has been lost to hunting due to urbanisation.

More recently a portion of country in the Staffordshire Moorland has been loaned by the Cheshire Hunt to the Cheshire Forest. The Cheshire Forest Hunt has always been one of the very few private packs in the UK whereby there is no committee, and the Masters are the sole managers of the Hunt and its affairs. 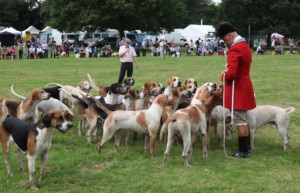 The hounds will be paraded into the main arena by permission of the five present joint Masters along with huntsman Andrew German. Andrew joined the Cheshire Forest hounds in 2007 & he is responsible for the exercising of the hounds & the everyday running of the kennels. He will be assisted by his Whipper in, Sam Goyette.

Andrew will give a short commentary on his day to day duties at the kennels.

You will be able to get up close to the foxhounds in the main arena & you can even take some photographs. For more information about the Cheshire Forest Hunt please visit the website www.cheshireforesthunt.co.uk