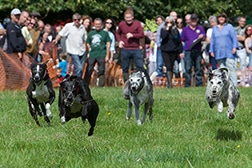 Cheshire Game & Angling Fair would like to thank Jim Greenwood, Kevin Nodan & the Merseyside Working Terrier and Lurcher Club for running this Section of the show for us, it was very well attended and this year we held a Terrier and Lurcher qualifier for the Countryman’s Weekly Champion of Champions 🏆

And the Best Bushing dog champion went to Pete from Chester who won the Merseyside Working Terrier and Lurcher Club Trophy 🏆 & the 💰 prize.

We would like to thank Skinners Pet Foods for sponsoring the Prizes for the Champion Dogs.